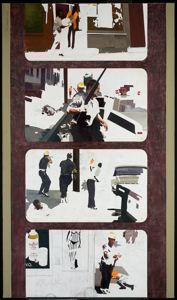 
Philip Morsberger painted Newark as a companion piece to his 1964 painting titled, November 22, 1963, of President Kennedy's assassination (now in the collection of The Butler Institute of American Art). Although painted four years apart, the artist was consciously depicting what he saw as two assassinations - both of unarmed men, shot to death. While the Kennedy painting was derived from the famous film of the Presidentâs assassination captured by Anthony Zapruder, the Newark painting was derived from Life Magazine photos of the shooting of a man caught looting during the Newark riots of 1967. Morsberger arranged the sequencing of images in Newark in an effort to mimic that of November 22, 1963, modifying the imagery of the actual photographs in order to heighten the similarities.

Your current search criteria is: Object is "Newark".