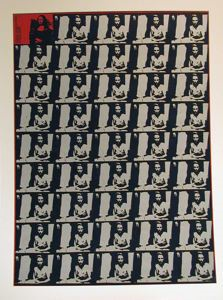 
By the early 1970s, artists in the Soviet Union were creating work reflecting the influence of Pop Art. Vitaly Komar and Alexander Melamid, the fathers of the Soviet offspring of Pop Art, called their new movement "Sots Art." Rather than creating images of Campbell Soup cans and other consumer goods used by their American counterparts, Sots artists appropriated official slogans and images from the political propaganda that confronted them daily. Their new art was often critical of Communism and Fascism, and in the 80s and early 90s, many artists, including Lemberskiy, found it necessary to emigrate to America.

Lemberskiy discusses his juxtaposition of images in this poster in the following passage: "Leonardo Da Vinci's "La Gioconda" ["Mona Lisa"] is an image of a woman of the 16th century, noble and convincing. For us she is a symbol executed by a great master. Next to her, the Mona Lisa of the 20th century, just as noble and convincing, has retained her traits in the face of animal-like Fascists who have made her undress and in a few minutes will send her to the gas chamber. Millions of "Giocondas" of the 20th century endured the hardships, suffering, and gas chambers [of the Holocaust]. Teir last path is portrayed through the rhythms and repetitions of one face. In comparing the two characters, one can confidently say that the "new" Mona Lisa is just as magnificent despite the fact that she is not drawn by the great Leonardo. With their similarities, they [both] portray the spirit of their time."

Provenance
The artist; given to his sister, Natalia Lyubomirsky; purchased by the Gallery in 1991
Keywords Click a term to view the records with the same keyword
1900-2000
Additional Images Click an image to view a larger version

Exhibition List
This object was included in the following exhibitions:
Portfolio List Click a portfolio name to view all the objects in that portfolio
This object is a member of the following portfolios:
1900 - 2000
Dimensions in Pop
Screen Prints & Non-Prints
Serigraphs