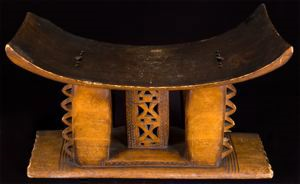 
In many African cultures, objects (such as carved figures and masks) can act as physical surrogates for spirits wishing to communicate and interact with the living. Stools are central objects in Asante spirituality. The Asante believe the stool used in life houses the ownerâs soul in death. This is based in the story of The Golden Stool that descended from the heavens to land in (and thereby legitimize) the lap of the first Asante king. The Asante saying goes, âA man with no stool is a man with no dignity.â
[Gallery label text, 2009]

The treatment of stools as sacred objects is unique to the Asante kingdom - an Akan empire founded by the great leader Osei Tutu in the late seventeenth century. The tradition began with the great Golden Stool which legend relates floated down from the sky and fell in the lap of Osei Tutu. To this day, the Golden Stool stands as a representation of the soul, or spirit (sunsum) of the Asante people. It is not a throne, but rather a powerful, sacred object, that is guarded by each successive king and forbidden to be sat upon or to touch the ground.

The most lavish stools are rewarded to important chiefs or members of the royal court, but commoners also maintain more modest stools. The stool is said to absorb some of the sunsum, or spirit, of his owner. Such an intimate link between owner and stool is reflected in the treatment of the stool after the owner's death. A high official's stool is linked to his role in office and when the owner dies, it is said that "a stool has fallen." The stool is then "blackened" and kept on its side in a separate "stool room." The soul of the ancestor is said to be embodied in the blackened stool.

Exhibition List
This object was included in the following exhibitions:
Bibliography
This object has the following bibliographic references:
Portfolio List Click a portfolio name to view all the objects in that portfolio
This object is a member of the following portfolios:
1900 - 2000
African Art
All Sculpture
Traditions & Encounters: Art of Africa, Oceania & Native North America

Your current search criteria is: Keyword is "GXST".