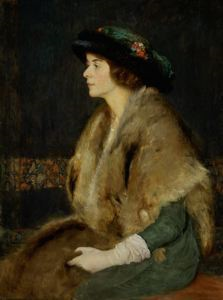 
Douglas Volk was known for his portraiture. This painting of his daughter, Marion, is a nice example of his work.

Volk was the son of Leonard Wells Volk, the sculptor of Life Mask and Hands of Abraham Lincoln (98.37.1-.2a-b) and Abraham Lincoln and the Emancipation Proclamation statuette (2008.29) in the collection of the Memorial Art Gallery. As the child of an artist, Douglas Volk was surrounded by art from an early age. He travelled to Paris as a young man where he studied under the academic painter, Jean-LÃ©on GÃ©rÃ´me. Volk went on to have a long and distinguished career in the United States where he exhibited widely, was the recipient of numerous awards, and taught generations of artists at Cooper Union, the Art Students League, and the National Academy of Design.

Provenance
Purchased as a gift for the Gallery from the exhibition "Paintings Selected from the International Exhibition of The Carnegie Institute, Pittsburgh, 1914" held at the MAG from April 9-28, 1915.
Keywords Click a term to view the records with the same keyword
art with Rochester connections
from Rochester collections
20th century
portraits
women
1900-2000
paintings
figure
Additional Images Click an image to view a larger version

Your current search criteria is: Keyword is "GXSX".