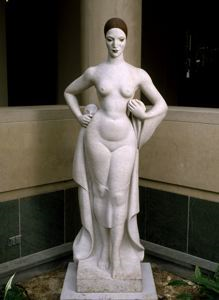 
Charlotte Whitney Allen and her husband hired Pittsford native Fletcher Steele to design a garden for their newly built house on Oliver Street [Rochester, NY] in 1915. The lot was small, ninety by two hundred feet, so Steele had to make use of interesting details to provide visual stimulation. The young landscape architect had strong notions of what would make a small backyard into a charming city oasis, which he enumerated in several articles and even a book, "Design in the Little Garden". Sculpture was one such detail Steele felt was crucial to a small garden, providing it met the proper criteria. He also considered space composition a necessary factor in good garden design. Some of the traits good garden sculpture should possess, according to Steele, include substantial mass, interesting silhouette, strong light and shadow, and contrasting material and color to the foliage around it.

Mr. and Mrs. Allen commissioned the French-born sculptor Gaston Lachaise in 1926 to create a figure for the focal point of their garden. They had first seen his work in an exhibition in New York City in 1918, from which they may have purchased a small sculpture, and possibly even earlier in the 1913 Armory Show. A group of letters housed at Kenyon College in Gambier, Ohio chronicles the development of their occasionally stormy relationship. After considerable delay, the sculpture was finally installed above the pool in the Oliver Street garden. Alfred Stieglitz, who championed Lachaise, wrote to the Allens in 1927 that "It [the sculpture] has been seen by at least thirty sculptors and their unanimous opinion has been that it is one of the grand bits of work that has come out of America." (Kenyon College Special Collections, Gambier, Ohio, March 26, 1927)

Provenance
Commissioned by Charlotte Whitney Allen, Rochester, NY in 1926; bequeathed to the Gallery in 1964

Related Objects
See a preparatory sketch for this figure: Sketch for "Fountain Figure", 82.11

See a watercolor by Ralph Avery of the garden this sculpture was commissioned for: "The Garden of Charlotte Whitney Allen," 89.30

See another sculpture designed for the same garden, by Alexander Calder: Untitled Mobile, 64.27
Keywords Click a term to view the records with the same keyword
from Rochester collections
20th century
nudes
women
1900-2000
sculpture
Additional Images Click an image to view a larger version

Your current search criteria is: Keyword is "GXSX".