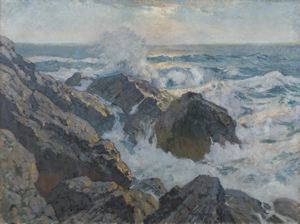 
In 1915, Memorial Art Gallery mounted an exhibition of seascapes by a leading American marine painter of the time, Paul Dougherty. After the show was already open to the public, the artist sent an additional canvas, Coast of Cornwall, Near St. Ives, which he considered his best work to date. George Eastman had expressed interest in purchasing a Dougherty for the MAG collection. This painting was a top contender but several members of the Art Committee requested director George Herdle to ask the artist to rework the foreground. Reluctantly, Herdle complied and the mystified Dougherty politely asked him exactly what he would like done. In the meantime, Herdle sought the opinion of painter Elmer Schofield, who âthought the criticism not well made.â The director quickly assured Dougherty that all was well, overrode the Committeeâs objections, and acquired this painting with funds donated by Eastman.

Provenance
Purchased from the artist by the Gallery in 1915, through the generosity of George Eastman
Keywords Click a term to view the records with the same keyword
American art
George Eastman Collection
seascapes
paintings
Additional Images Click an image to view a larger version

Your current search criteria is: Keyword is "GXTB".