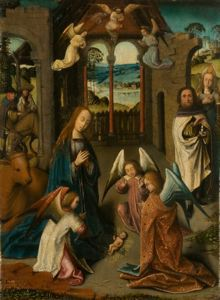 
Set against a backdrop of the ruins of a church, this picture depicts the adoration of the infant Christ by his mother and three kneeling angels. The two shepherds at the left, along with their animals, are about to enter the ruins; at the right, standing under a broken arch, Joseph carries a lighted candle. Three angels hover above the scene in the remains of the church gable. The artist renders in meticulous detail richly decorated fabrics, architectural motifs and foliage as well as the story of the picture. The landscape in the background possibly depicts an actual location in the Netherlands.

Your current search criteria is: Keyword is "GXUK".