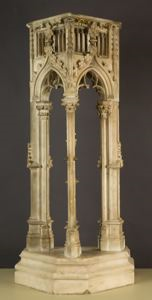 Mourner's Niche from the Tomb of Philip the Bold


This sculpture was originally part of the tomb of Philip the Bold, who was the ruler of the Netherlands and regent of France until his death in 1404. Forty mourning figures, called pleurants, form a procession around the base of the tomb. Each is placed in an arcade characterized by gothic architectural forms. The gisants, or funerary statues, of the Duke and his wife rest on top of the tomb.

The tomb of Philip the Bold, originally in the Carthusian monastery of Champmol at Dijon, France, was destroyed in the French Revolution. Many of the surviving fragments, including the top of this arcade, were salvaged and then sold to collectors. The tomb was extensively restored from 1818 to 1823 and now stands in the Museum of Fine Arts in Dijon.

Exhibition List
This object was included in the following exhibitions:
Bibliography
This object has the following bibliographic references:
Portfolio List Click a portfolio name to view all the objects in that portfolio
This object is a member of the following portfolios:
1000-1400
1400 - 1600
Acquisitions from the R. T. Miller, Jr. Fund
All Sculpture
Architecture
Medieval Sights & Sounds
Passport to the Past
Renaissance Art
Selected Work Purchased with Funds from R.T. Miller, Jr.
Web Links See links to web pages and lesson plans
MAGexplore MAGexplore provides in-depth information and close looking at over 200 objects in MAG's collection.
ORGAN INTABULATION See music chosen for this artwork from MUSICUS, the worldâs first online museum of music.

Your current search criteria is: Keyword is "GXUK".