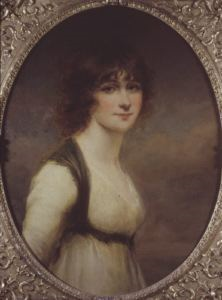 
Having a portrait painted by a noted artist such as John Hoppner was a mark of status; decades later, American collectors still enjoyed the prestige of owning portraits of European gentry. Even into the twentieth century, America was seen as a young country, and newly-wealthy Americans could âborrowâ the pedigree that accompanied the sitter by displaying these portraits. Comprehensive estate taxes were introduced in England in 1894, and in the years that followed, families were forced to sell off some of their family holdings, including real estate, household belongings, and works of art, to pay these death duties. At the same time, wealthy American industrialists like George Eastman, who owned this painting and several other British portraits, were building their art collections, and bought family portraits as well as Old Master works as they came on the market.

Little is known of Mrs. Addison; her husband was in the civil service of the East India Company, and they lived in India for much of their married life.

Provenance
Family of the sitter; purchased from them by the Cottier Gallery, New York, 1912; purchased from them by George Eastman (1854-1932), Rochester, NY, 1913; bequeathed to the University of Rochester, 1932; transferred to the Gallery in 1978.
Keywords Click a term to view the records with the same keyword
George Eastman Collection
18th century
portraits
women
1600-1800
paintings
Additional Images Click an image to view a larger version

Exhibition List
This object was included in the following exhibitions:
Bibliography
This object has the following bibliographic references:
Portfolio List Click a portfolio name to view all the objects in that portfolio
This object is a member of the following portfolios:
1600 - 1800
18th Century European Art
All Paintings
George Eastman Collection
Portraits
Women

Your current search criteria is: Keyword is "GXUM".