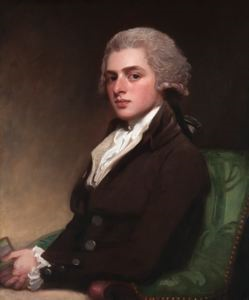 
Romney must have been well acquainted with James Clitherow as a young man: he made two portraits of him, as well as a replica, all within a span of a year. Clitherow, who had recently graduated from Oxford at the time this portrait was made, appears thoughtful and composed, demonstrating his erudition by holding a book. Newspaper accounts describe the portrait as having been painted for a price of just over Â£20.

Romney directs the viewerâs focus by sketching Clitherowâs hands and stock, or neckcloth, only loosely; he concentrates instead on the details of the head, coat, and chair.

Exhibition List
This object was included in the following exhibitions:
Bibliography
This object has the following bibliographic references:
Portfolio List Click a portfolio name to view all the objects in that portfolio
This object is a member of the following portfolios:
1600 - 1800
18th Century European Art
All Paintings
George Eastman Collection
Men
Portraits

Your current search criteria is: Keyword is "GXUM".