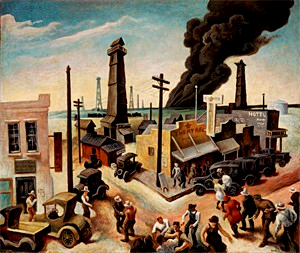 
Early in his career, Thomas Hart Benton was involved in the American abstract movement, Synchromism. In the 1920s, Benton embarked on a style that incorporated Synchromist rhythmic line and expressive color with representational imagery of rural America. With this major shift in style, Benton established the Regionalist movement. Many consider Boomtown to be the artistâs first Regionalist masterpiece.
[Gallery label text, 2007]

Boomtown is one of the masterpieces of the Gallery's collection because of its impressive and unique depiction of an American landscape. When Thomas Hart Benton sketched this panoramic scene from a second floor window, the smoky fire on the horizon signified progress, not pollution. Borger, Texas was a boomtown that sprang to life in 1926 after a refinery company hit a gusher that produced 5000 gallons of oil a day.

Benton is one of the three major American Regionalists (the other two are Grant Wood and John Steuart Curry), so called because most of their subjects were about life in the rural heartland of America.

While Benton was not a fan of contemporary modernist painting, and in fact disdained artists who painted in the abstract style, he couldn't help but be influenced by the curvy and streamlined aesthetic of his times and the way in which artists were reinterpreting three-dimensional space. Consider the way in which the people, buildings and landscape are layered from top to bottom on the canvas, rather than being laid out carefully from front to back in the manner of traditional artistic renderings.