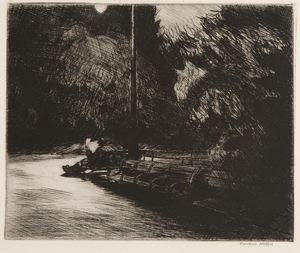 Night in the Park


In 1921, when this print was created, Edward Hopper was a relatively unknown artist who had sold a few paintings but had not begun to receive the acclaim that would be his within a few years. By 1931, when it was exhibited at MAG and acquired with funds donated by a relative of the Watson family, Hopper had become HOPPER; the Museum of Modern Art had purchased one of his paintings the year before. While MAG does not own any of his canvases, we are fortunate to own this print and one other from Hopperâs decade of printmaking, 1915â1924.

The cinematic quality of Hopperâs paintings is evident even in his etchings. A shadowy figure placed at the far end of a line of benches could easily be a character from a Hollywood âfilm noir.â