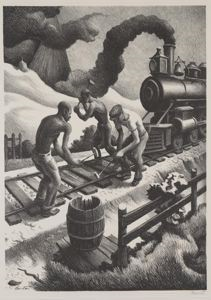 
In Ten Pound Hammer, Thomas Hart Benton explored the machineâs relationship to man and labor in an âold story of my youth â before the steam hammer beat out John Henry.â According to the American folk legend, John Henry was a heroic African-American man and the greatest steel driver in the late-1900s westward expansion of the railroad. In the story, when the railroad owner brought in a steam-powered hammer, John Henry offered to compete against the machine to save his and his menâs jobs. Although he won the race, John Henry died in victory. The legend of John Henry, which may be based in historical events, grew in popular stories and songs as an allegory of the threat of modernization and the umanning of American labor.