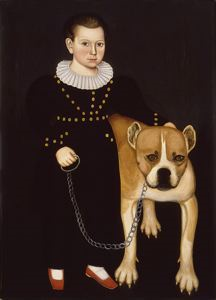 
The Lacey family lived and farmed in Scottsville, New York, a small village south of Rochester on the Oatka Creek. Like many families of means, they used the services of a local artist to have their likenesses painted, since photography as we know it did not exist. For many years, this artist was thought to be Noah North, but recent scholarship points to Milton Hopkins, with whom North probably apprenticed. Painting was not Hopkins' sole occupation. As well, he farmed and was a carriage and sign painter, and was involved in anti-Masonic, abolitionist, and temperance politics.

Pierrepont Lacey was born in 1832, and like many little boys, he probably was not comfortable posing for a painting in his best clothes. The family dog, Gun, most likely didn't stand still for long, either, so it may have been quite a challenge for the artist to capture the likenesses of boy and dog. When Pierrepont was fifteen, his family moved to Marshall, Michigan. He grew up, married, and was the father of one son. Milton Hopkins moved to Ohio shortly after this portrait was painted, where he continued to paint portraits and work for the Underground Railroad.


Like many young boys, Pierrepont Lacey was probably not comfortable posing for a painting dressed in his best suit and red shoes. Gun, the family dog, was most likely a restless subject for the artist to capture, as well.

There are six known portraits by Hopkins showing children dressed in their finest clothes, often accompanied by their dogs. All of the childrenâs parents were connected to the artist through their activities in anti-Masonic, abolitionist, and temperance politics.

MAGâs nearly full-size portrait is one of the most engaging likenesses done by Hopkins and has become an American folk art icon.

Your current search criteria is: Keyword is "GXVE".