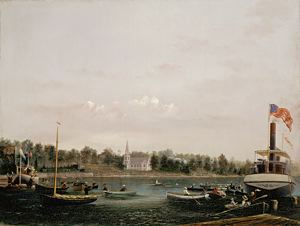 
Skaneateles Lake is located in the Finger Lakes region, part of the traditional lands of the nations that make up the Haudenosaunee. The frequent use of Haudenosaunee names in this regionâGenesee, Irondequoit, Honeoye, and Canandaiguaâis evident in the name of the lake and the town located on the northern tip, Skaneateles, which means âlong lake.â

This painting depicts a sculling race from an era, and an area, when travel by boat was more common than today. The two steamboats seen here have flags bearing their names, identifying them as the Echo (on the left) and the Glen Haven, which carried vacationers arriving on trains and carriages at the top of Skaneateles Lake down to the resorts and summer cottages at the southern end. This scull race was widely advertised as part of the Fourth of July festivities on the lake in 1878. The artist shows people cheering from nearby boats as Charles E. Courtney from Union Springs passes by, winning the race by only one minute. The subject of the painting was unknown until it was included in a 1962 exhibition in New York, where a Skaneateles native recognized the scene and wrote a letter to his local paper.

Exhibition List
This object was included in the following exhibitions:
Bibliography
This object has the following bibliographic references:
Portfolio List Click a portfolio name to view all the objects in that portfolio
This object is a member of the following portfolios:
1800 - 1900
19th Century American Art
All Paintings
Rochester & Western New York Views
Seascapes
Transportation