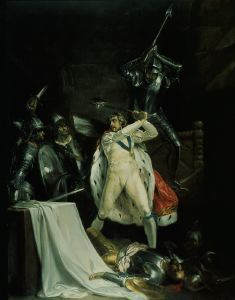 
Francis Wheatley was best known for his historical paintings, scenes of daily life, and portraits. He trained at the Royal Academy in London and became the director of the Society of Artists in 1774. Debts and an unfortunate affair with the wife of a colleague led to his abrupt departure from England to Ireland. He returned in 1783, when he began painting illustrations for works by contemporary authors. The success of these âpainted illustrationsâ led to major commissions, including the one for this monumental painting from the print publisher Robert Bowyer.

One of Bowyerâs most ambitious projects was an illustrated edition of David Humeâs "The History of England." It comprised not only a lavish publication, but the creation of a âHistory Galleryâ for the public display of the original paintings. According to Bowyerâs prospectus, the paintings were intended âto rouse the passions, to fire the mind with emulation of heroic deeds, or to inspire it with detestation of criminal actions.â

Wheatley responded to this challenge by depicting the more dramatic version of Richardâs death, in which he was beheaded rather than starved in prison. The theatrical gestures and expressions, lurid coloring, and bold brushwork serve to heighten the violent drama of the events. In the end, the project was a financial disaster; the paintings from the gallery, including Wheatleyâs "The Death of Richard II," were sold in a lottery in 1807.

Related Objects
See an oil study for this painting: Study for "The Death of Richard II," 87.2; see an engraving made by Anker Smith after this painting, The Death of Richard II (after Francis Wheatley), 87.3
Keywords Click a term to view the records with the same keyword
18th century
violence
world history
armor
men
1600-1800
paintings
Additional Images Click an image to view a larger version

Exhibition List
This object was included in the following exhibitions:
Bibliography
This object has the following bibliographic references:
Portfolio List Click a portfolio name to view all the objects in that portfolio
This object is a member of the following portfolios:
1600 - 1800
18th Century European Art
All Paintings
History in Art
It Came from the Vault: Rarely Seen Works from MAGâs Collection
Lesson Plans Using MAG Objects
Many Faces, Many Places
Men
Objects with Lesson Plans for ELA Standards
Web Links See links to web pages and lesson plans
The Killing of Richard II: Interdisciplinary Lesson: Art, ELA and Social Studies Explore how art can illuminate a work of literature, how art techniques change as society changes, and how art gives a window into another time and place.
It Came from the Vault exhibition catalogue Entry for this artwork in the It Came from the Vault exhibition catalogue. The exhibition ran from March 17-June 9, 2013

Your current search criteria is: Keyword is "GXXA".