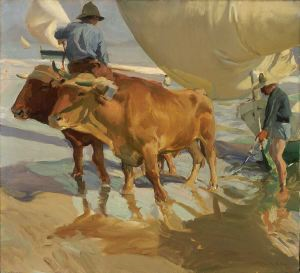 Oxen on the Beach


Sorolla discovered Impressionism during an 1885 visit to Paris and took its revolutionary approach to light and color back to Spain with him. There he developed his own style, characterized by large, strong brushstrokes, and soon his international reputation was established. Sorolla's special ability to render the play of bright sunlight on the sea, on sand, and on figures along the beach has been praised by critics. "Oxen on the Beach," which features all three surfaces, is a brilliant display of Sorolla's talents.

Provenance
Purchased from the artist by Roland Knoedler, Paris (dealer), 1912; transferred to M. Knoedler & Co., New York (dealers); purchased from them through the generosity of Mrs. James Sibley Watson (1855-1945), Rochester, NY, by the Gallery in 1914
Keywords Click a term to view the records with the same keyword
20th century
oxen
seascapes
men
1900-2000
paintings
Additional Images Click an image to view a larger version

Your current search criteria is: Keyword is "GXYH".