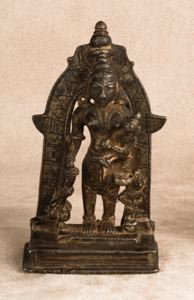 
A mother goddess of fertility and creation figures prominently in many belief systems. Although this sculpture has long been named Kali, Goddess of Destruction, an identification of this Hindu goddess has not yet been confirmed. She holds on her hip a small child and is accompanied by another. In her left hand is a cup and in her right, possibly a weapon.

Kali is a paradoxical figure: wild and destructive, yet also maternal. One story tells of Kali on the battlefield, dancing and rampaging wildly, drunk on the blood of her victims. In an effort to protect the world from her chaotic energy, her partner Shiva turns into a crying infant; Kaliâs maternal impulses prevail and she calms down to soothe and nurse the child in need.

Your current search criteria is: Keyword is "GYAL".