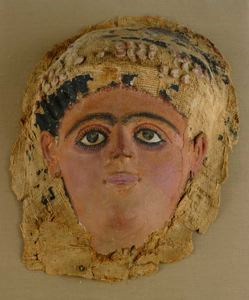 
Ancient Egyptians believed that ornamented masks and body coverings as well as sacred texts could magically protect the mummy in the afterlife. This mask is made of cartonnage, a material of plaster and linen similar to papier-mÃ¢chÃ©. In ancient Egypt, these cartonnage forms, frequently ornamented and painted with depictions of gods and goddesses, were placed on the body after it was mummified. These images, along with hymns and texts from the Book of the Dead, protected the mummy in the afterlife in the same way as the decoration on anthropoid coffins.

Exhibition List
This object was included in the following exhibitions:
Bibliography
This object has the following bibliographic references:
Portfolio List Click a portfolio name to view all the objects in that portfolio
This object is a member of the following portfolios:
Ancient Egyptian Art
Egyptian Art
Web Links See links to web pages and lesson plans
Protected for Eternity: The Coffins of Pa-debehu-Aset, Gallery Guide Explore the world of Pa-debehu-Aset, and the sacred stories that relate the Egyptian journey to the afterlife. Learn how a mummy is made, and explore reading and writing in ancient Egypt.

Your current search criteria is: Keyword is "GYGA" and [Object]Object Type is "Sculpture".