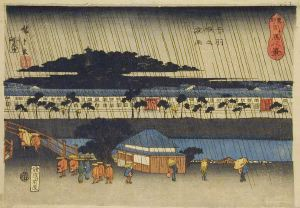 
Full Title:Night Rain on Akabane from the series "Eight Views of the Shiba District in the Capital City"
Object Type: Print
Medium and Support: Color woodcut
Credit Line: Gift of Dr. James B. Austin
Accession Number: 1987.34.2
Link to this object
Location: Not currently on view


"Night Rain on the Xiao and Xiang" becomes "Night Rain on Akabane." The white cartouche at the approach to the bridge carries the seal and name of Echizen-ya HeisaburÃ´, publisher of the series, with the round official "approved" (aratame) seal of the government censor. In the upper left corner are Hiroshige's signature and seal and the seal of the publisher Izumi-ya Ichibei.

In the lower left corner is Akabane Bridge across the Meguro River (now little more than a small canal under a superhighway). We are looking south across the river at the outer military barracks of the mansion of the Arima of Kurume, low white buildings set with red gates and roofed with blue tiles. Since 1688 the samurai Arima family was charged with fire prevention at the important ZÃ´jÃ´ji temple nearby that is now behind the viewer (see "Evening Bell at Mt. San'en," 87.34.5), and on a hill behind the compound looms their fire-watch tower (hinomi yagura)âthese tall watch-towers were among the most familiar sights in the combustible city of Edo.

Bibliography
See general mention in Shozaburo Watanabe, "Catalogue of the Memorial Exhibition of Hiroshige's Works on the 60th Anniversary of his Death," 1918, p. 27; cat. no. 115 describes the set, Eight Views of Shiba, Yedo. [See http://www.hiroshige.org.uk/hiroshige/watanabe/catalogue_103_133.htm, no. 115.] This print is entitled "Akabane No Yau" or "Evening Rain at Akabane."
Keywords Click a term to view the records with the same keyword
Japanese
1800-1900
woodcuts
rain
Ukiyo-e
Additional Images Click an image to view a larger version

Exhibition List
This object was included in the following exhibitions:
Bibliography
This object has the following bibliographic references:
Portfolio List Click a portfolio name to view all the objects in that portfolio
This object is a member of the following portfolios:
1800 - 1900
All Graphic Arts
Japanese Art
Relief Prints
Weather & Water
Web Links See links to web pages and lesson plans
Catalogue of the Memorial Exhibition of Hiroshige's Work Online version of Shozaburo Watanabe's book: Catalogue of the Memorial Exhibition of Hiroshige's Work on the 60th Anniversary of his Death, Tokyo: Ukiyoye Association, 1918. This work is listed under catalogue no. 115, Akabane No Yau, Evening Rain at Akabane.

Your current search criteria is: Keyword is "GYRI" and [Object]Century is "19th Century" and [Objects_1]Sort_Artist contains "Ando Hiroshige".