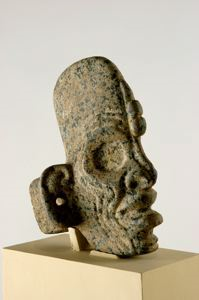 
The so-called hachas of the Mesoamerican ballgame were not axes as the Spanish name implies, but were named for their sharp, thin shape. Scholars debate over whether or not stone hachas functioned as markers on the ballcourt or representations of protective gear worn by the players. Hachas are frequently heads, which when worn on a playerâs yoke might have alluded to a âtrophy headâ of the playerâs previously defeated opponents.
[Gallery label text, 2009]

Provenance
Intermercado Limitado, San Jose, Costa Rica (dealers?); purchased from them by the Gallery in 1971
Keywords Click a term to view the records with the same keyword
Pre-Columbian art of Central & South America
Totonac
Meso-American ballgame
Additional Images Click an image to view a larger version

Portfolio List Click a portfolio name to view all the objects in that portfolio
This object is a member of the following portfolios:
Ancient Americas

Your current search criteria is: Keyword is "GYTS".