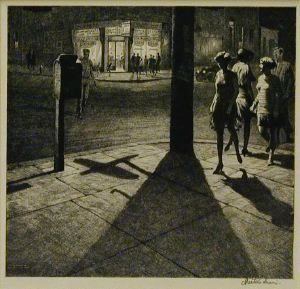 
New York nights are evocative and mysterious in Martin Lewisâs work. His print Corner Shadows plays with ambiguity in its use of flickering light and figures gliding through darkness. In his study The Dark Side of the Screen: Film Noir, film historian Foster Hirsch suggests that Lewisâs work, as well as work by other New York artists including Edward Hopper and John Sloan, contains âanticipations and echoes of the noir city.â Edginess, obscured faces and figures, and looming shadows heighten the anxiety that the work communicates.

Corner Shadows was issued by the Print Club of Cleveland as its presentation print for 1930, and is considered Lewisâs most important print commission.

Your current search criteria is: Keyword is "GYUQ".