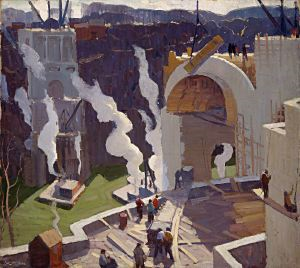 
One of Rochester's most picturesque river crossings is the Veterans' Memorial Bridge (Ridge Road), completed in 1931. In this painting, Carl Peters records the complex engineering systems that were used to build the bridge's series of seven granite-faced concrete arches. Most likely, his vantage point was the steep west bank of the Genesee River, whose green waters flow far below; work has been completed on both sides of the river but the bridge is still lacking its large central span.

On the bridge is a dedicatory plaque donated by World War I Gold Star Mothers - women who lost sons in World War I. At the dedication, the president of the group said:

Great bridges across flowing waters are
indicative of the continual labors of life.
In the very presence of continual change,
they seem to connect the past with the
present, even as they connect the East
with the West, the North with the South...

Your current search criteria is: Keyword is "GYWJ".